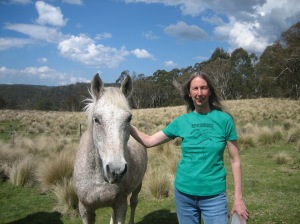 Paula Boer started her lifelong love of horses when she first rode a pony on a ranch in Canada, aged 7. On moving to England at age 9, she commenced weekly riding lessons and became hooked. Her horse infatuation led to Paula’s bedroom being filled with toy stables, posters of golden stallions, horse gear and, of course, horse books. Her books included non-fiction works as well as novels, most notably Elyne Mitchell’s The Silver Brumby series.

Paula’s own writing career started at school where she wrote a story from the horse’s perspective for her final English exam. Combining her love of horses with her passion for travel, she raced the native horses in Mongolia, climbed the heights of Colombia on horseback, and competed in Endurance rides around Australia. She claims the best way to experience a country is from the back of a horse.

Although not always on horseback, Paula has travelled in sixty countries on six continents. After retiring from the hectic life of computer consultancy, she wrote her first novel, The Okapi Promise, based on her adventures in Africa in 1990. This fictional memoir was published by IFWG Publishing in November 2010.

From her own experiences of catching and breaking in brumbies, Paula decided to set her next novel in the Snowy Mountains of Australia where she lives. The Brumbies series was created, with the first book of five becoming an Amazon ‘Best Seller’ in 2012. The final, Brumbies in the Mountains, was published in January 2015.

Paula recently signed a contract for a fantasy trilogy, The Equinora Chronicles. The first book, The Bloodwolf War, is scheduled for release by IFWG Australia in November 2019. Set in a horse-dominated world, The Equinora Chronicles encompasses Paula’s love of all things equine, and dragons. She also writes non-fiction articles for horse magazines, and has many animal/nature related prose-poetry pieces published by Indigo Dreams Press (UK).

Paula is a regular judge for the Aurealis Awards and a submissions reader for Aurealis Magazine.